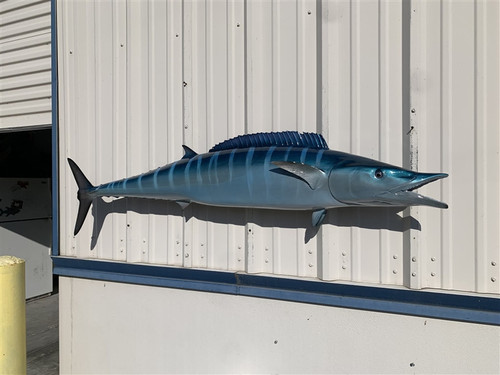 Availability:
Usually Ships In 40 to 45 Days 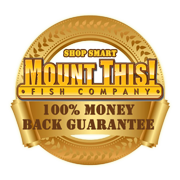 This 63" Wahoo fish mount is a two sided wall mount also known as a full mount. Wahoo are also commonly called Ono, especially in the sushi industry and in the Hawaiian islands. Wahoo's are extremely fast predators that crash their prey at lightning speeds and are notorious for coming unbuttoned during the fight when they race towards the boat and are able to create slack in the line and head shake out the lure. Inexperienced anglers and captains will often pull the boat out of gear and not reel fast enough to keep this from happening. This wahoo fish mount, like all our fish replicas, has a money back guarantee!

Wahoo are normally a silvery, grey color on their side with a blueish black fade coming from the back and sometimes having darker grey and blueish bellies. The most common markings on a wahoo are the electric silvery white vertical stripes that run from the top of the back to the belly. Our normal paint schedule is as described above to showcase the fish as if it is lit up and alive in the water. If you happen to have a picture of the wahoo you caught and would like us to paint this wahoo replica to match your catch please email the photo to our Photo Email Address.

This size Wahoo requires a wooden crate to safely transport from our factory here in Florida to your home or business location. Feel free to email or give us a call if you would like to obtain a shipping quote prior to ordering. Our crating department is extremely experienced in crate production assuring you of its safe arrival. In the rare instance that something does go wrong during transit from us to you, we will cover all charges on returning the wahoo mount and either produce a new replica for you or fix the damage if it is possible to do to where no damage is noticeable.

Each Wahoo fish mount will arrive to you with an easy to hang bracket on the backside of the replica. Hold the mount on the wall, mark the spot where the bracket touches the wall, drill in a screw or hammer in a nail and then hang your new mount. The "easy level" bracket will allow you to position the mount parallel to the ground or pivoted so that the mount is either swimming up your wall or down your wall. The choice is yours!

Return Policy*: We are proud to offer a 100% satisfaction guarantee on our products. The customer must contact our office within 7 days of receipt of product to get a return confirmation. Items must be received back to the Mount This office undamaged. We recommend using the same box, bubble wrap and any other items the mount was packaged with in order to ship it safely. Shipping and handling charges will not be reimbursed or credited back to the customer. A restocking fee may apply.
*Exceptions include custom painted replicas including made to order custom replicas including custom flamed replicas and Half Sided Series replicas when wanting to return because of not knowing it was a Half Sided Replica. All of our Half Sided Series replicas are clearly described as Half Sided Series replicas and we can not except returns based on the customer not taking the time to read the descriptions. NO returns, refunds or deposits refunded on orders invoiced with International ship to addresses.